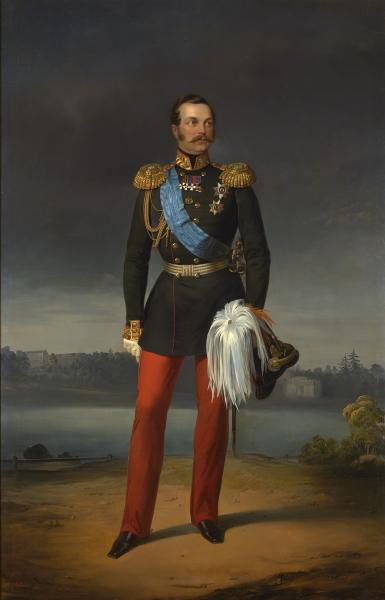 Bottman G.
Artist of the second half of the 19th century

Alexander II (the Liberator; 1818–1881) was the oldest son of Emperor Nicholas I and Empress Alexandra Fyodorovna, née Charlotte of Prussia. He was educated under the direction of the poet Vasily Zhukovsky. He was made Emperor of All the Russias in 1855. His reign began with reforms in the social-political life of the country. On the occasion of his coronation (August 1856), amnesty was granted to Decembrists and the Circle of Mikhail Petrashevsky, as well as to participants in the November Uprising in Poland of 1830–1831; he also suspended conscription for three years. In 1856, he formed a Special Secret Committee “For the Consideration of the Conditions of the Peasants”. In 1857, he decided to eliminate military settlements. Among his reforms were the abolition of serfdom (1861), the introduction of budget transparency (1861), the abolition of corporal punishment (1863), the implementation of land and judicial reforms (1864) and the introduction of universal conscription (1874). Under Alexander II, a new credit and banking system was created, trial by jury was introduced and private enterprise intensified. New territories in the Caucasus, Central Asia and in the Far East became part of the Russian Empire. On 1 March 1881, Alexander II was fatally wounded by a bomb set by terrorists on the Catherine Canal Embankment.