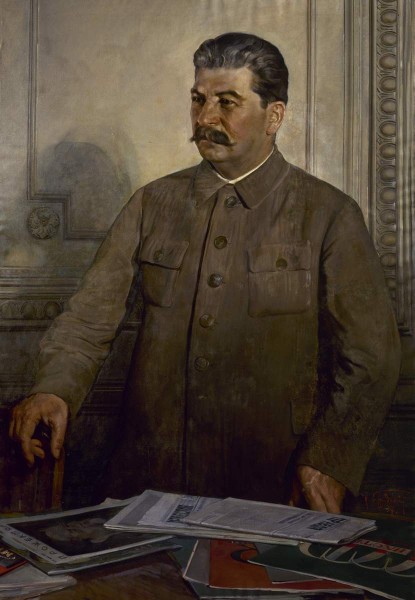 It is presumed that this portrait was submitted for a closed competition among the most authoritative Soviet artists for portraits of Stalin organised in 1937. Brodsky’s work was criticised for being too cold and for showing excessive naturalism in its detail which, in actual fact, were particular traits of the official works of this master: it lent them a near-photographic, documentary accuracy that conflicted with the canons of Socialist Realism, according to which depictions of Stalin were to arouse reverence and near-filial love. Here Brodsky depicts Stalin as a severe, strict leader, forcing the viewer to look up at him from below. The image clearly lacked the requisite sense of warmth, which aroused the dissatisfaction of the commission in charge of the competition. Joseph Vissarionovich Stalin (Dzhugashvili, 1879–1953): a leading Soviet and Communist Party figure. Member of the Politburo of the All-Union Communist Party (Bolsheviks) (1919–1952), General Secretary of the Central Committee of the Communist Party of the Soviet Union (1922–1953), member of the Presidium of the Central Committee of the Communist Party of the Soviet Union (1952–1953), Chairman of the Council of People’s Commissars of the USSR (1941–1953), Hero of Socialist Labour (1939), Hero of the Soviet Union (1945), Marshall of the Soviet Union (1943), Generalissimo of the Soviet Union (1945).