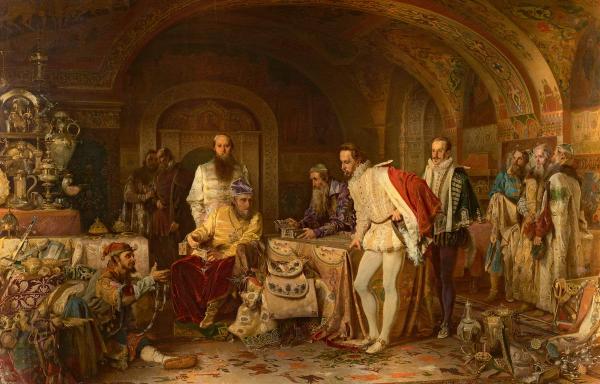 This painting records an episode from the final years of the rule of Ivan IV, years that were marked by serious failures in both internal and external politics. The English diplomat Jerome Horsey (around the 1550–1626) lived in Moscow during almost twenty years, working for the English trading delegation named “The Muscovy Company”. He was the author of several works about Russia. During the Livonian war, he delivered military supplies from England. Wanting to demonstrate his power, the tsar brought him under the Kremlin Treasury’s vaults. The detailed brushwork, exhibiting the texture of objects: the splendour of the gems and metal, the softness of the silk and velvet distinguish the painting.

Tsar Ivan IV (the Terrible) (1530–1584) was the son of Grand Prince Vasily III, of the House of Rurik, and Elena Glinskaya, who came from a line of Lithuanian knights. He was crowned in 1547 as the first “Tsar of All the Russias”. With the participation of a narrow circle of close associates he carried out a number of reforms in the 1550s. At the first Zemsky Sobor (Assembly of the Land) in 1549 a law code for the whole of Russia, the Sudebnik, was adopted and a regular army of streltsy – people under arms who carried out permanent military service for pay – was established. The Stoglavy Sobor (Hundred Chapters Assembly) was summoned in 1551 to unify religious rites and deal with matters of canonisation. Ivan conducted successful campaigns to absorb the Khanates of Kazan (1552) and Astrakhan (1556), as well as Bashkiria (1557). He was defeated in the Livonian War to gain access to the Baltic (1558–1583). Clashes with boyar circles opposed to Ivan led to the formation in 1565 of the oprichnina (from the Old Russian oprich, meaning “special” or “apart”) when, after separating off part of the country and the troops under his own personal rule, the Tsar took extreme measures to crush the old boyar families so that power could be further centralised. Ivan supported the development of culture, the building of churches and enlightenment. According to various sources he had as many as seven wives. He was called “Terrible” (Grozny) by the people because of the savage executions of political opponents. Historiography has given him an extremely ambiguous evaluation.