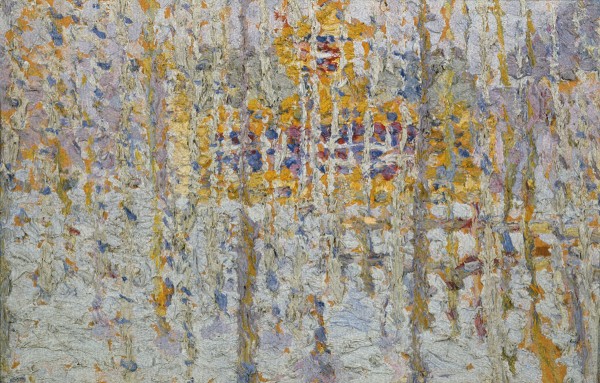 From Malevich’s autobiography, we know that he began his career as an artist in 1898, and that he was initially self-taught. However, from 1898 onwards, and up until 1907, when the first documented exhibition of his work took place, he made efforts to undertake professional artistic training, if only of a partial nature.

In Kiev, his place of birth, Malevich attended a drawing school. In 1904, after he moved to Moscow, he studied at one of the city’s private drawing studios. He explored all of the new European art movements, and little by little began to assimilate their various pictorial concepts.

His earliest, most premeditated and most serious artistic interest was Impressionism. In 1904, while viewing the collection of the Moscow-based art collector Sergei Schukin, Malevich had the opportunity to examine Claude Monet’s paintings of Rouen Cathedral. He never forgot that moment, and referred to it as a “great event”. “For the first time”, he wrote, “I saw the brilliant reflections of the blue sky represented in thick, clear tones. After that, I too became an Impressionist”.

This work, titled Landscape with Yellow House, was painted in 1906 and stands out for its refined combination of colors. On this occasion, Malevich chose the technique of pointillism, which involves placing dots of pure color onto the canvas in such a way that, from a certain distance, they resolve into the desired image. If we glance quickly at this painting, all we see is a series of colored splashes, all mixed up together. However, if we look at the canvas more carefully, the splashes resolve themselves into more familiar shapes and come together to create a comprehensible image. Malevich achieves this without detracting from his overall objective of articulating the painting’s theme through the interrelationship of different colors.