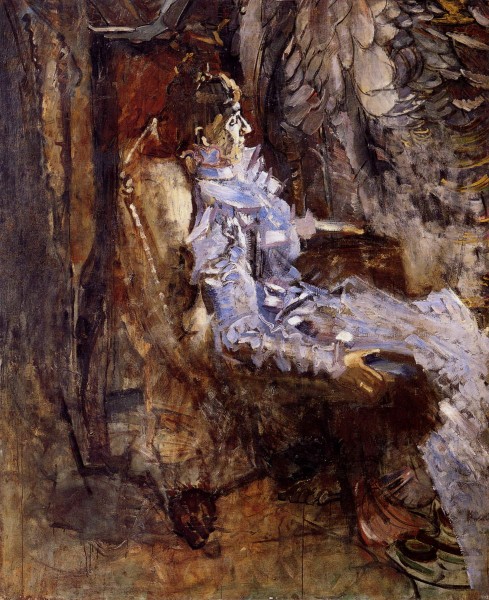 Nadezhda Ivanovna Zabela-Vrubel (1868–1913): Opera singer, wife of the artist. Graduated from the St Petersburg Conservatoire (1891), performed at Savva Mamontov’s Moscow Private Opera (1897–1902).
This portrait is noted for its philosophical interpretation of life and monumental general resolution, incarnating important aspects of Mikhail Vrubel’s art in the last years of his life and work. The subject of Lady in Lilac is the artist’s wife, an opera singer. Judging by the light reflected in her face, she is resting at a fireplace, though her outer appearance does not express a state of calm. The tones accentuate the tense working of her mind and inner tension.
Unlike the majority of Vrubel’s other portraits of his wife, Lady in Lilac is dominated by the tragic element often encountered in the artist’s later canvases and upheld here by his trademark blue and violet tones. The brushstroke is striking – expressive and nervous, yet simultaneously exact and economic. The light fabric of the dress is masterly painted in separate brushstrokes; Nadezhda’s golden wedding ring is depicted by two white and yellow strokes. Although it is only a quick sketch, the portrait embodies great emotional force. It was begun on a piece of large canvas already containing a composition consisting of two figures – a prophet and seraph (feet and wings can be seen in the lower section of the canvas). Lady in Lilac reflects the outstanding talent of an artist able to unite in colour two images different in character and time.