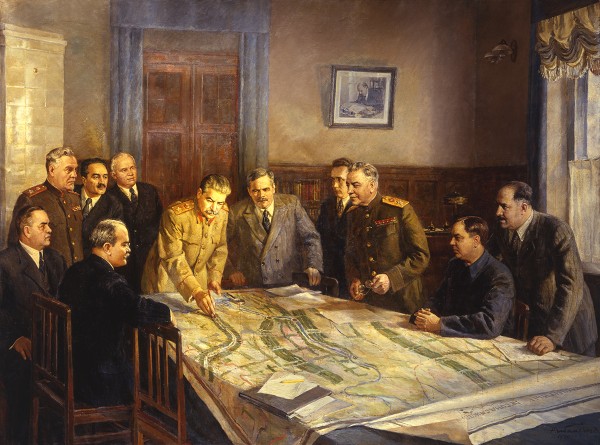 Painted in celebration of Stalin’s 70th birthday in 1949, this work was shown at two major exhibitions: the All-Union Exhibition of Art and Joseph Vissarionovich Stalin in the Fine Arts. However, the character of the leader’s portrayal departs fundamentally from that of other formal paintings of the time. The dictator is shown with other members of the Politburo — Vyacheslav Molotov, Nikolai Shvernik, Nikolai Bulganin, Anastas Mikoyan, Nikita Khrushchev, Andrei Andreyev, Alexei Kosygin, Kliment Voroshilov, Georgy Malenkov and Lazar Kaganovich — discussing the planting of future forests “for the happiness of the people”. Although dressed in a marshal’s uniform with the star of a Hero of the Soviet Union, Stalin is intended to look like a simple and accessible man of the people. Stalin’s “simplicity” was also a principal and important element in the formation of his iconography. Although the Communist Party laid down specific guidelines regarding the ideological content of works of art, Soviet painters also learnt to adapt themselves to political changes. After the rejection of Stalin’s cult of personality and the death of Lavrenty Beria, Dmitry Nalbandyan painted over the latter’s figure, forming a logical compositional break between Andreyev and Kosygin.