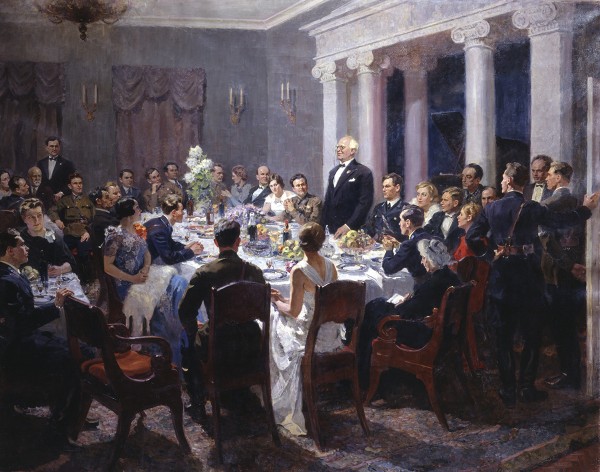 The canvas was painted by Efanov for the exhibition 20 Years of the Workers’ and Peasants’ Red Army and Navy and then displayed at the New York World Exhibition in 1939. Among the depicted guests are many well-known performing artists of the day in addition to aviators and Konstantin Stanislavsky himself. The appearance in Efanov’s oeuvre of a group portrait of stage performers is no accident: the artist was an actor and lifelong theatregoer himself, and his wife was an actress at the Stanislavsky Theatre. And though Efanov abandoned the stage in the mid-1930s, the theatre remained dear to him. The event portrayed in the painting took place on 22 December 1935 in Stanislavsky’s apartment studio. The artist began work on the canvas in 1937, finishing it a year later, after the great di rector’s death. Depicted in the composition are thirty-eight people, all painted by the artist from life. In his autobiography Efanov recalls: “I painted the performers and aviators directly from life. They posed for long stretches at a time, sometimes at night. All the painting’s details — the still life on the table, the chairs and the enormous carpet — were also painted from life.” Efanov also met with Stanislavsky numerous times, studying his character, bearing and gestures and making many sketches and studies. The multi-figure composition is masterfully arranged and the interior and festive still life on the table painted freely and broadly, without distracting attention from the scene’s main action. The composition’s semantic focus is the director’s standing figure, towards which all present are turned. The theatre headed by Stanislavsky and bearing his name enjoyed sponsorship over the Nikolai Zhukovsky Air Force Academy, whose members are also present in the scene, demonstrating the mutual relations between different social strata. In full accord with the ideological demands of its time, the painting was intended to illustrate the idea of the beauty and dignity of the era’s new people and underscore the notion that true social unity was possible only within a socialist society.