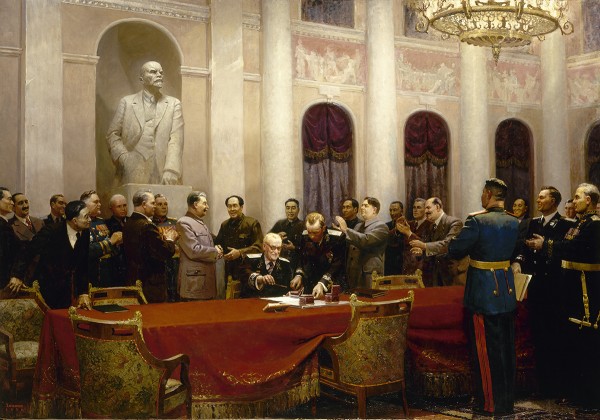 In the Name of Peace (The Signing of the Treaty of Friendship, Union and Mutual Assistance Between the Soviet Union and the People’s Republic of China)

The Soviet Union was the first country to establish official diplomatic ties with the newly-proclaimed People’s Republic of China in 1949. In Moscow on 14 February 1950, the USSR and the People’s Republic of China signed a 30-year contract on friendship, union and mutual assistance. Showing unprecedented loyalty to China and ceding many of the USSR’s claims in Chinese territory, Stalin was acting in the strategic interests of strengthening the USSR’s “everlasting and indestructible friendship” with its far-eastern neighbour. Depicted in the painting are Soviet and Chinese public figures including Guo Moruo, Mao Zedong and Zhou Enlai.