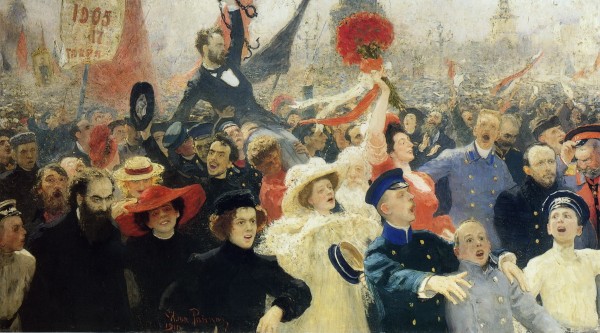 llya Repin painted this work in 1907, in response to the manifesto signed by Tsar Nicholas II on 17 October 1905. The October Manifesto was drawn up by Count Sergius Witte, chairman of the Council of Ministers, who regarded constitutional concessions as the only way to save the country from revolution. The manifesto granted full civil freedoms, including freedom of speech, assembly, the press and a parliament known as the Duma. Liberal sections of Russian society welcomed the reforms. Repin wrote: “The picture represents a procession of the liberation movement of progressive Russian society ... mostly male and female students, professors and workers with red flags singing revolutionary songs... hoisting a freed political prisoner onto their shoulders, the thousand-strong crowd moves across the square of a large town in the ecstasy of common delight.” The depicted people include the philologist Mstislav Prakhov (left), the actress Lydia Yavorskaya (holding a bouquet) and the art critic Vladimir Stasov (centre). Before sending 17 October 1905 to the Espozizione lnternationale in Rome in 1911, Repin completed and dated the painting. Russian viewers saw it for the first time in 1912, at the forty-first show of the Society of Travelling Art Exhibitions.