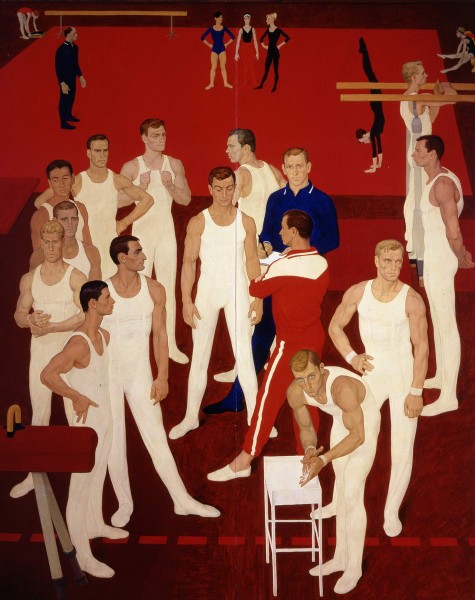 Gymnasts of the USSR

Dmitry Zhilinsky often manifested his creative aspirations in portraiture. One of the idiosyncrasies of his art was his habit of depicting in the concrete not the fleeting, but the most important element of a man’s personality. Zhilinsky preferred clear, collected and intellectual images. He was inspired by the art of the Old Masters, particularly the early Italian Renaissance and Old Russian painting. The artist openly addresses the art of the past in his modem images: “l love exactness of expression and completeness of form – in my own understanding of these words, of course. “Zhilinsky’s works are distinguished by their pure and decorative tones, melodious lines, plastic silhouettes and harmonic compositions. The artist’s painting technique was also unusual; he frequently worked in tempera on Ievkas, lending a colourist sublimity to his works. Gymnasts of the USSR is, in essence, a group portrait of famous Soviet sportsmen, many of them world and Olympic champions. Among the figures in the background are Polina Astakhova (triple Olympic and twice world champion), Boris Shakhlin (triple Olympic and twice world champion) and Yury Titov (Olympic and world champion, later president of the International Federation of Gymnasts). An original personal “tuning” of thought, will and feelings can be seen in the heroes’ faces and expressive gestures. The distinct composition, sharp foreshortenings and pure tones are also psychological.