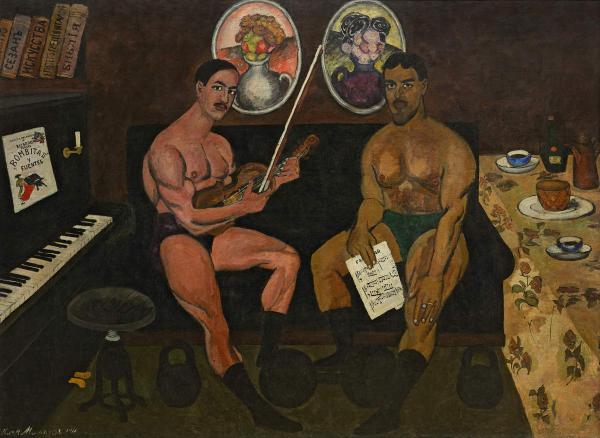 This work belongs to the early period of the history of the Russian avant-garde. It was unveiled at the Jack of Diamonds exhibition organised by a group of young artists led by Mikhail Larionov in the winter of 1910/11. Ilya Mashkov was one of the rebel artists who hoped to “rejuvenate” art with the help of phenomena previously excluded from the realms of high art – naïve and motley signboards, trays, wooden and plasticine toys and the aesthetics of fairground shows. This unusual picture, with its enormous dimensions and hypertrophied forms united by a dark contour, depicts two naked strongmen playing music surrounded by weights, dumb-bells and books – the Bible and monographs on Giotto and Cézanne (the idols of the young artists). Mashkov’s portrait was perceived as a manifesto of a new movement in art, intending to make viewers pause, look and think.