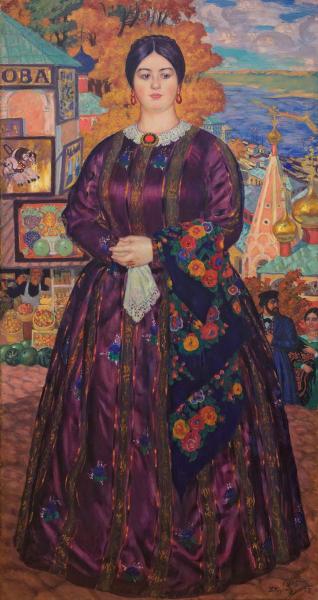 Boris Kustodiev continued to paint moving and colourful images even after illness had deprived him of the power to move independently. As the artist himself correctly noted, he inhabited a magical kingdom of recollections, daydreams and nostalgic visions. Kustodiev’s motifs and subjects symbolised a life that had disappeared irrevocably into the past, yet had still lost none of its tart aroma. With their portly figures, ruddy cheeks and flowing movements, his haughty merchant’s wives personified the Russian national ideal of health and beauty. They were often the heroines of Boris Kustodiev’s half-ironic, halfadmiring picture panels. After the revolution, the artist’s images of merchant’s wives were perceived as a vision of a life that had slipped irrevocably into the past — the comfortable and regulated lifestyle of the merchant class, which had existed in Russia for centuries and had now vanished forever.