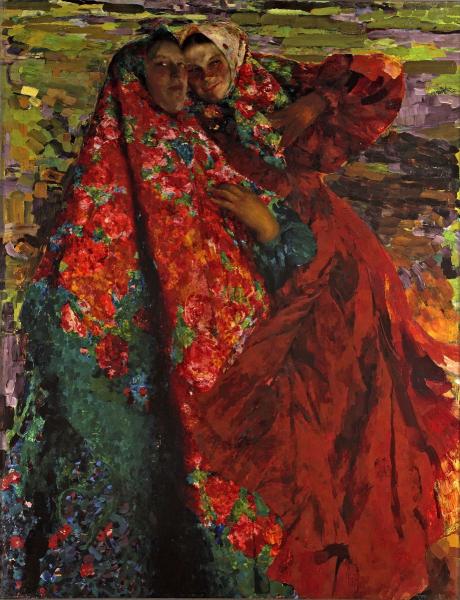 A student of the Imperial Academy of Arts at the end of the nineteenth century, Philipp Malyavin introduced a new type of peasant woman into Russian art — a stately, proud and sometimes intrepidly independent woman. His models were the inhabitants of the villages of Ryazan Province, dressed in bright festive attire. The painting is a sublime and romantic image of Russian womenfolk, with their wholesome characters and inner stature. The two heroines are strong and healthy women, filled with a sense of their own dignity and virtue. They display integrity of character and inner strength. The faces of the girls are meaningful, the looks in their eyes are intent and enigmatic, the colours of their attire glimmer in a bewitching manner. The expressive images are intensified by the artist’s inspired and temperamental painting. Malyavin contributed Peasant Women to the World of Art exhibition of 1906 and Sergei Diaghilev’s L’Exposition de l’Art Russe in Paris and Berlin.