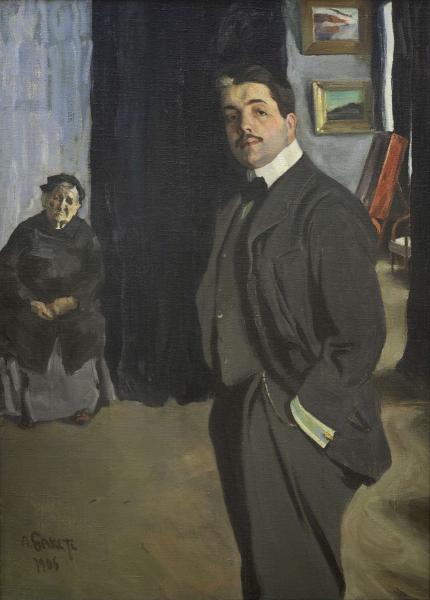 Portrait of Sergei Diaghilev and his Nanny

Sergei Pavlovich Diaghilev (1872–1929) was one of the central figures of fin-de-siècle cultural life in St Petersburg. Before launching the Saisons Russes in Paris, he founded and published the World of Art (Mir iskusstva) magazine (1898–1904), curated a series of important art shows and wrote articles on art and the theatre.

One of Léon Bakst’s most outstanding works of portraiture, Portrait of Sergei Diaghilev and his Nanny is, perhaps, the most famous image of the legendary Russian impresario, who was a close friend of the artist. Diaghilev’s slightly fastidious pose, raised eyebrows and appraising glance betray a self-confident and authoritative personality. The figure of the old nanny sitting in the corner was a typical feature of the way of life of the old Russian nobility. Contrasting the figure of Diaghilev, she offers a clearer insight into the personality of the sitter — a former provincial whose energy and talent helped him to not only conquer the Russian capital, but the whole of Europe as well.