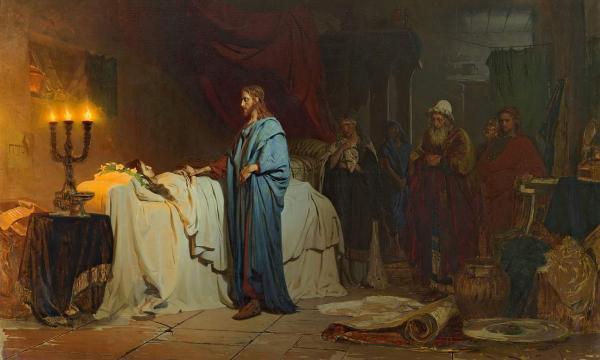 The Raising of Jairus’s Daughter

The Raising of Jairus’s Daughter was given to final-year students of the Imperial Academy of Arts in 1871 and received the most lifelike and emotional incarnation in the work of Ilya Repin. The artist was at first not particularly inspired by the theme, until he associated it with the death of his sister. Tragedy and sorrow combine with lucidity and hope, enriching the painting with an atmosphere of agitation, expressed in the tense ring of the colours and the lighting contrasts. The image of Jesus Christ is interpreted in the finest traditions of classical art and evokes the sensation of the special significance of the event. Its prototype can be regarded as Alexander Ivanov’s Christ from Christ’s Appearance to the People, though Repin’s Christ is simpler and more human. The sorrowful and deferential hope of the girl’s parents is contrasted to Jesus’ austere solemnity. The painterly culture and spirituality of the young artist’s canvas rank it alongside the leading works of Russian art. The Raising of Jairus’s Daughter was awarded a major gold medal and was acquired by the Imperial Academy of Arts.