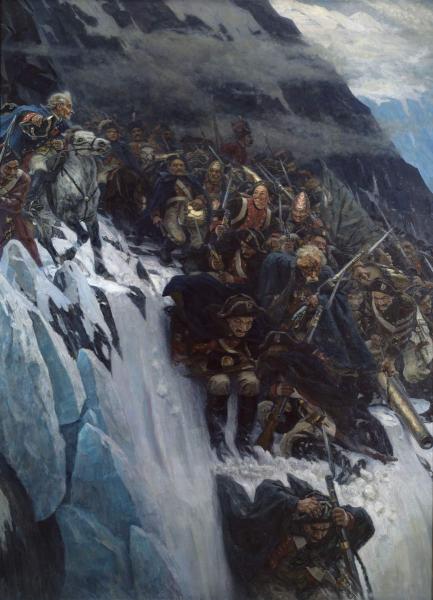 Suvorov Crossing the Alps in 1799

Count Alexander Suvorov (1729–1800) was a Russian fieldmarshal who commanded a Russo-Austrian force in Italy in 1799. Ordered to relieve Russian troops in Switzerland, he famously marched across the Alps. Shown at the Society of Travelling Art Exhibitions in 1899, this work was painted in celebration of the hundredth anniversary of Suvorov’s campaign. Vasily Surikov specially travelled to Switzerland, painting landscape studies at the historical sites and sliding down the mountains near Interlaken in order to capture the sense of movement. The artist explained his concept: “The most important thing in the picture is the movement. The selfless courage. The men proceed, subordinating to their commander.” The master succeeds in conveying the emotions gripping each man at this moment of tension and the single surge of the soldiers in response to their commander’s leadership.