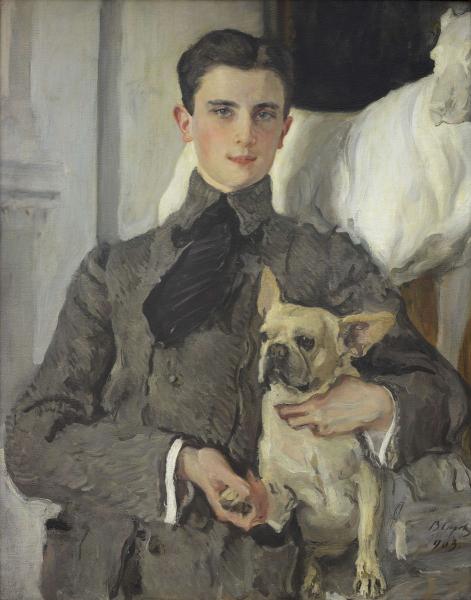 In terms of its painting and delivery of the human character, Portrait of Count Felix Sumarokov-Elston (Later Prince Yussupov) is one of the most elegant works in the gallery of portraits of Russians of various classes painted by Valentin Serov from the mid-1880s onwards. The image of the sixteen-year-old schoolboy reflects many features later typical of this refined aristocrat, who participated in the murder of Grigory Rasputin in 1916. Although Serov took two years to paint the portrait, this fresh and sharp picture appears to have been executed in one sitting. The dog is masterly painted, with subtle understanding of animal psychology. In his memoirs, Felix Yussupov wrote that Serov considered the dog to be his best sitter. The artist’s portraits of Felix and his father, mother and elder brother (1902–03, Russ. Mus.) constitute an original cycle of family portraits, extremely rare for the twentieth century. The Yussupov series represents one of Valentin Serov’s highest achievements in portraiture.