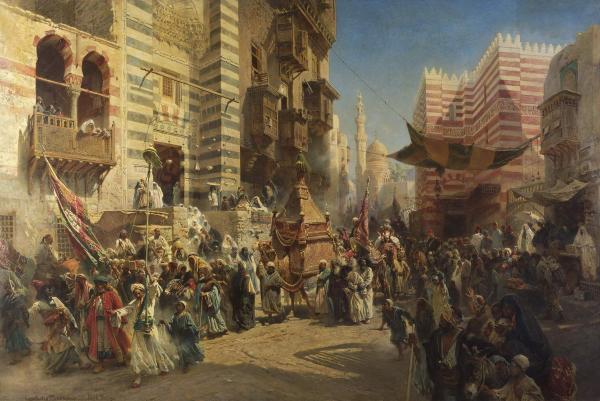 The Translation of the Holy Carpet in Cairo

K.Y. Makovsky added to the Russian art of 1870-s a new Oriental line that referred to the exotics of the East and was very popular in Europe. The artist started to develop this motif after a trip to Cairo due to the illness of his wife in October 1872. After that he undertook two more trips to Africa and created numerous landscape studies and genre pictures, as well as a gallery of Arabic portraits. Makovsky started to work on the painting Return of the Holy Carpet from Mecca to Cairo at the order of the Russian crown prince, future Emperor Alexander III.  The artist created this work in Paris, and his artistic style was influenced by the trends of contemporary French painting. In 1876 the picture was exhibited in the Paris Salon.

The painting refers to an ancient Muslim tradition. The holy carpet of kiswah, a relic for all Muslims, is used to cover the most sacred shrine of Islam, the Ka’bah in Mecca. Every year the best Egyptian masters wove and embroidered a holy carpet to be transferred to Mecca. The carpet was placed into a special reliquary called mahmal that was fixed on a camel’s back. The train walked around the streets of Cairo surrounded by pilgrims and believers and then left for Mecca. In the end of hadj the pilgrims received small parts of the carpet and brought them home to different parts of the world. Upon return the pilgrim were usually met by festive crowds of Cairo citizens. The meeting ritual celebrated the return of the pilgrims and the mahmal that was considered sacred.

The first variant of the painting entitled Return of the Holy Carpet from Mecca to Cairo (1875) is exhibited in the State Art Gallery of Armenia (Yerevan), two studies with the same name can be found in the State Tretyakov Gallery, and a study named Dervish - in the State Russian Museum.