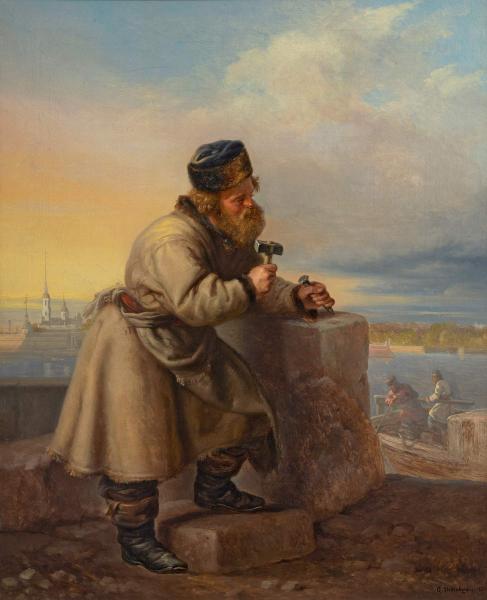 Eldery Stonemason on the Neva Embankment

The Austrian artist Hans Gustav von Dittenberger came to Russia by the invitation to take part in creating murals for the palace of Grand Duchess Maria Nikolaevna (The Mariinsky Palace). A year later he produced the painting “Eldery Stonemason on the Neva Embankment”. Regarding the depiction of the Peter and Paul Fortress in the background, the artist presented the stonemasons on the Palace Embankment, the oldest stone embankment of St. Petersburg.

To the middle of the 18th century the biggest and most beautiful buildings of the capital were being built along the Neva embankment but the embankments themselves remained to be wooden. That’s why Catherine II who came to the Russian throne in 1762 established the Commission for the St. Petersburg and Moscow Stone Construction by one of her first decrees. The Commission started with the developing of the project of facing the Neva embankments with the stone. The special decree was issued and it told that “Here in St. Petersburg the banks should be faced with stone in front of all our palaces, gardens and state buildings”. The Winter Palace was completed in 1762 and it was in front of it where the first stone embankment was constructed. The banks of the Neva had become the building site for almost 20 years. The work was not easy and took a lot of efforts as it was quite difficult to strengthen the river’s banks because of their unsteadiness. First the piles were hammered in and then the space between them was filled with eath and cobblestone. Having strengthened the bank one started facing it with blocks of pink Finnish granite or Piterlite (named after the bay of Peterlahti of Piterlaks). The walls, parapets and pavements of the first stone embankments of St. Petersburg – The Palace embankment, Galernaya, the embankments of the Winter Canal and the Ekaterinhof Canal (from a galley – a kind of ship with rows) were built from the blocks of this stone. The blocks of the granite were quarried on islands in Finland to the south of the towns Hamina and Kotka. The embankment were constructed high enough keeping in mind the danger of floods. During the works the quays on the Neva were built. The Palace Embankment was completed in November 1767.`