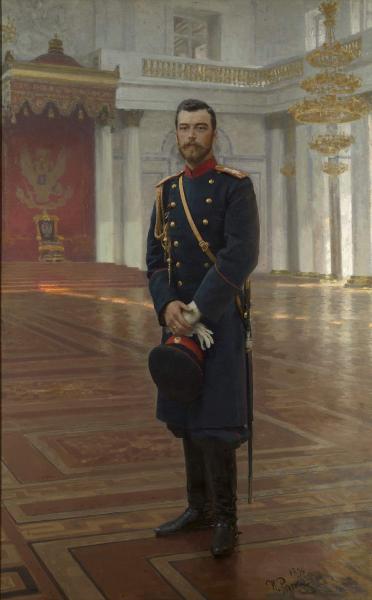 Nicholas II (1868–1918) was the last Russian Emperor, son of Emperor Alexander III and the Empress Maria Fyodorovna, née Danish Princess Dagmar. He came to the throne on 20 October 1894. His reign was characterised by a rapid economic rise and a sharp worsening of the country’s socio-political situation, which took place against a background of industrial modernisation and agrarian reform. The State Duma began to work, observing the blossoming of culture which came to be called the Silver Age. The kind-hearted and mild character of the Emperor was not conducive to creating an image of a strong State identity. The weakening of the monarchy’s power took place against a background of serious shocks: the Russo-Japanese War (1904–1905), the First World War (1914–1918) and the revolutions of 1905–1907 and 1917. On 2/15 March 1917 the Emperor abdicated the throne. In the summer of that year he was sent to Tobolsk, then taken to Yekaterinburg. On the night of 16–17 July 1918 he was shot with his family in a house belonging to an engineer called N. N. Ipatyev. In 1998 his remains were reburied in St Petersburg, in the Cathedral of Peter and Paul. On 20 August 2000 the Russian Orthodox Church canonised the Tsar’s family as martyrs.