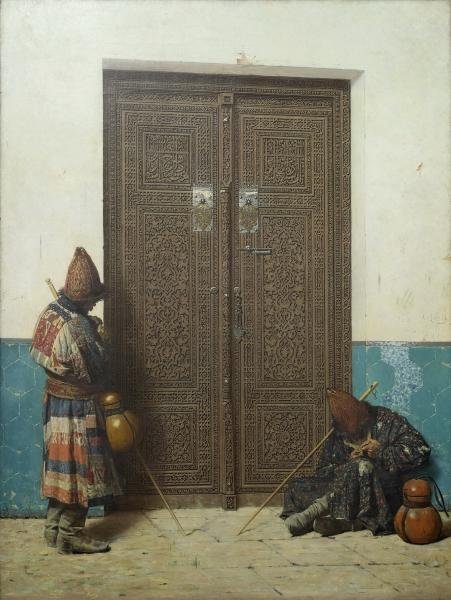 At the Doors of a Mosque

The canvas refers to the Turkestan Series. At times the contemporaries called the artist “Vereshchagin of Tashkent” during these years to distinguish him from the painters of the same name. Vereshchagin was interested in the ethnography of the East no less than in battle scenes and he as a rule fascinated his viewers by unusual subjects and its treatment.

The canvas as the most of his works was painted on the base of impressions from nature which he got during his travelling to Central Asia. It was there where the artist first conceived and then painted a series of genre compositions. The painting features the portal of the mosque Hazrat Yasawi venerated by Muslims as a sacred place and beggars at its door. The artist tried to represent an idea of decadence of the once magnificent and terrible civilisation to which he also devoted the work “The Doors of Tamerlane” (1872-1873, The Tretyakov Gallery) composed similar to the painting of the Russian Museum.