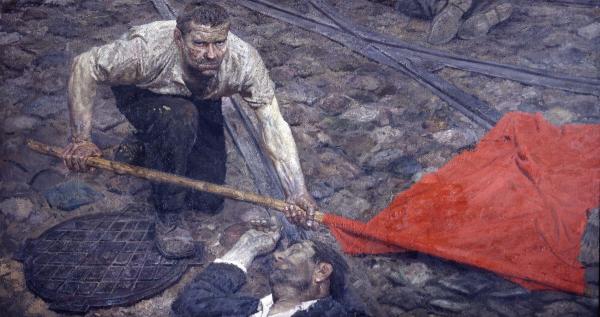 Picking up the Banner

Although Helium Korzhev’s Communists triptych (1959–60) depicts the events of the revolution, it is inherently linked to the period of the Khruschev Thaw, when Soviet art rejected the external pomp and embellished reality of the Stalin period. Korzhev’s oeuvre lay at the heart of an entire movement known as the “severe style.” This particular work is the central part of the artist’s Communists triptych. The subject of the composition is extremely similar to Ivan Shadr’s Cobblestone – Instrument of the Workers (cat. 239). Korzhev always underlined his fascination with the famous Soviet sculpture and his own desire to scale similar artistic heights. Austere in colour and ascetic in technical execution, Korzhev’s dramatic and close-up compositions are like stills from a movie.