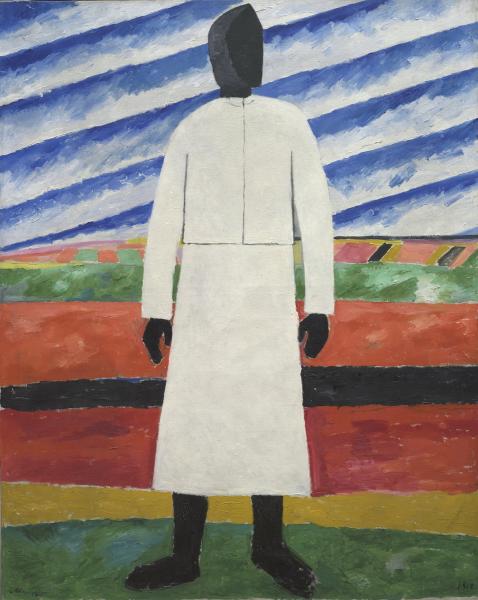 Although Malevich’s images of peasant life are connected to the themes he explored from 1910 onwards, they stand out for their sense of drama and intensity, which is most profoundly expressed in the impersonality of the figures. In this painting, a peasant woman is standing immobile and inscrutable, on a striped patch of land and with a banded sky in the background. What can she do in such a silent world? The sobriety and geometric regularity of the horizontal lines of the landscape intensify the sensation of inertia, and the feeling of bleak stillness exuded by this female figure with her arms hanging down impotently at her sides. The sinister funereal color of her body and head adds to her melancholy character. The contrast Malevich creates between the woman’s black face and white clothing is reminiscent of the basic color scheme that underpins his Black Square, and also serves to lend the figure a certain metaphysical quality.

Despite this stillness, however, the diagonal bands of the sky give the woman’s posture a certain energy, as she turns her head skyward towards the sad call of her fate, or perhaps to offer up a prayer to an invisible Creator. Undoubtedly, this peasant woman reflects the tragedy that unfolded towards the late 1920s, when the fragile world of the Russian peasantry and its harmonious way of life collapsed. However, there are some who have connected this painting to the classical tradition: specifically Pieter Brueghel the Elder’s painting titled The Parable of the Blind Leading the Blind, in which case Malevich’s artwork takes on a much broader philosophical meaning.