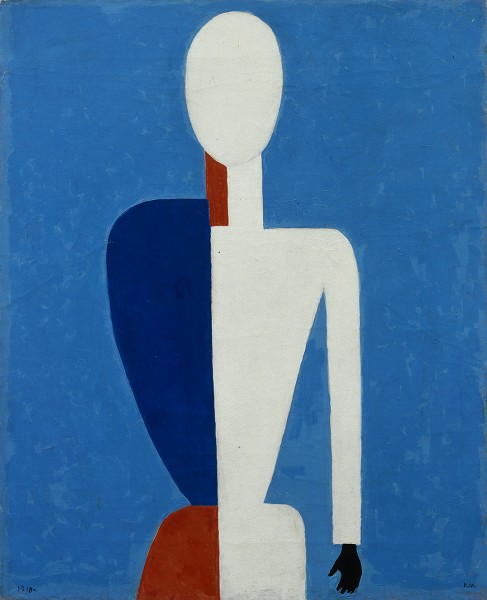 Torso (Prototype of a New Image)

In his capacity as the director of the State Institute of Art, and knowing the importance of his work and research, Malevich asked the Russian authorities for permission to travel abroad. Although the request was not granted immediately, the artist was finally able to undertake his trip in 1927, which gave him the opportunity to exhibit some of his works in Europe.

As befits a painter of Polish origin, the first European capital to show Malevich’s work was Warsaw. The exhibition then moved to Berlin, where his work was received with great acclaim. Malevich then planned to visit Paris, but the Russian authorities made him return to the Soviet Union.

Upon returning from his journey, Malevich embarked on an attempt to examine his own role in the history of modern art. To do so, he conducted an unprecedented reconstruction of his artistic career, in accordance with the theoretical visions and concepts he had espoused at the time. He carried out this reevaluation during the latter period of his life, when he was a mature and well-established artist, albeit one with a tendency to reexamine his own progress and rewrite his own artistic career and developmental trajectory. Nonetheless, the extent to which he rewrote his own history is without comparison in all of 20th century art.

This painting, titled Torso, was created by Malevich between 1928 and 1929. However, he took the unprecedented step of back-dating it to 1910, and on the reverse he added the following text: “First composition of a new image / theme / color and form / and content”. These words attest to the fact that Malevich’s aim was to create a new artistic formula for a Suprematist approach to the profile of the human form.

The composition of this artwork comprises a complex yet harmonious interaction of two halves within a single whole. Through the regularity of the lines, planes and oval shapes, and the juxtaposition of colors – which were true to those of the object itself, except for variations in brightness – the artist has created an idyllic image of a Post-Suprematist heroine. However, this “new image” hides another ideological and artistic approach, one more in keeping with Suprematist ideals, in which the “new man” is the center of the new world. The inclusion of the color white in the figure’s torso conveys a sense of the infinite, and in this instance implies that the infinite is found inside man. For Malevich, this meant that man lay at the very heart of absolutism.