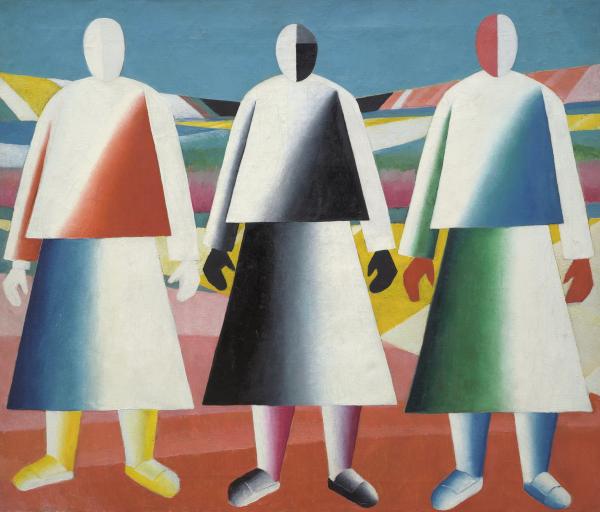 Girls in a Field

On the rear of this canvas, which was painted between 1928 and 1929, Malevich added the following, rather eloquent inscription: “Girls in a Field, 1912. Supranaturalism, Number 26”. The artist had created a new term, combining the concepts of Suprematism and naturalism to define the idiosyncrasy of an artistic language that fused geometric forms, abstractionism and a more figurative approach. However, the inclusion of the year “1912” served to back-date this new “Supranaturalism”, making it a precursor and predecessor of Suprematism.

In this artwork, Malevich continued to develop the compositional technique he had adopted in many of his Post-Suprematist paintings. The rather synthetic-looking figures of the peasant girls are placed against a similar and largely ornamental background. The figures are identical, with the same positioning of the arms and the same clothes. The only difference between them is in the color of their clothes and the color of their heads. As in other works by Malevich, color and form are the true protagonists: however, the rich expressiveness of this new approach makes this particular painting much fresher, livelier and more emotional. The same can be said for the other works that form part of his Post-Suprematist “peasant cycle”. Perhaps the spirit and composition of this painting is linked to a social ambience that the artist could no longer experience, as the peasant way of life he so admired was being destroyed before his eyes.