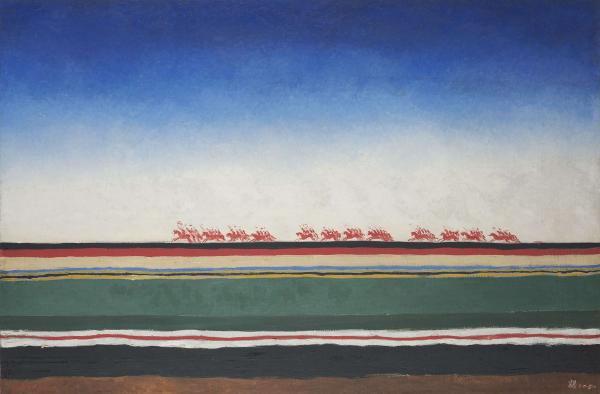 For many years, this artwork, painted in 1932, was considered Malevich’s only contribution to the official history of Soviet art, in light of the fact that the artist had fallen out of favor. It was only permitted into the pantheon of Soviet art due to its title, which appears to eulogize the Russian Revolution and the Red Army. Malevich intentionally dated this painting 1918, in the bottom right-hand corner of the canvas, and on the back he wrote: “From the capital of the October Revolution, the Red Cavalry rides to defend the Soviet frontier”.

Despite these grand words, this painting is in fact one of the most desolate and tragic works that Malevich produced during this final stage of his artistic career.

In the composition of this extraordinary artwork we can see a reflection of Malevich’s thoughts on his contemporary reality. In the artist’s own words: “Some leaders invite you to contemplate a spiritual existence, while others incite you to accumulate material goods. And so, their faithful followers begin to march… The flags are changed as frequently as dishcloths, but it is all in vain: our feet remain sweaty, our fingers are still chafed and blistered. The energy of human movement, in the hope of gaining something, is reminiscent of the madmen who rush headlong towards the horizon because they believe they have found the ends of the earth, forgetting that they are already standing on the horizon and do not need to run anywhere”.

In this painting, the revolutionary horsemen, whipped by an unseen force and almost lost in the empty, eternal space, race across the land under a host of red flags. The small red silhouettes almost melt away between the Suprematist bands of pure color. Their movement is frantic, useless and absurd, as their journey is endless and the sky and the earth are indifferent to the coming and going of human beings. Ultimately, the Promised Land has never, and will never, exist.