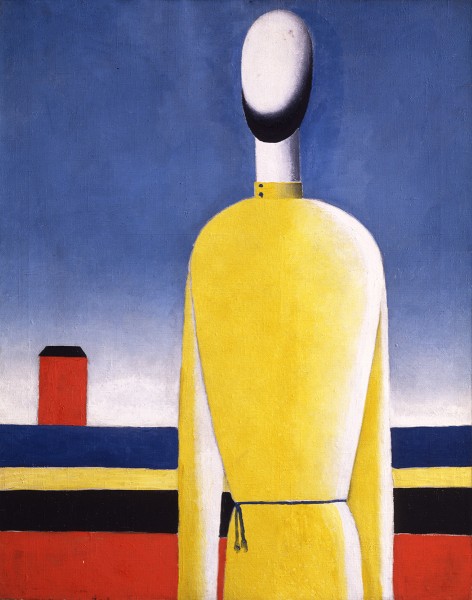 This artwork was painted between 1928 and 1932. It is undoubtedly one of the most expressive and dramatic paintings from Malevich’s later period, and one in which he explores a more tragic perspective of the world and society at that time.

The image of a mute, faceless peasant, the funereal patch of red and black land, and the frozen blue sky all transmit a sense of imminent and inevitable fate. The sobriety of the horizontal lines of the landscape intensifies the feeling of stupefaction emanating from this solitary and defenseless figure, whose arms hang hopelessly at his sides. It is an image that brings to mind the words of the writer Leonid Andreyev, when he spoke of “a naked man in a land stripped bare”.

Even the solitary house on the edge of the composition adds to the “complex presentiment” of the painting’s title. Comprised of a red rectangle with a black, trapezoid roof somewhat reminiscent of a coffin lid, the house is far from a symbol of a warm and welcoming refuge. Life, liberty and happiness bear no relation to this creepy building in the midst of a vast and empty plain; indeed, the more we look at it, the more it comes to resemble an impenetrable sarcophagus. Indeed, both its appearance and its name, the “Bolshoi Dom”, or “big house”, seem to allude to the colloquial name given to the offices of the Ministry of Internal Affairs, which was located on Liteyny Prospect in St Petersburg. The Ministry building loomed large in the lives of a great many people, and in spring 1930 Malevich himself was arrested and imprisoned there. He was fortunate, however, as he was released just a few months later. At that time, the totalitarian horror that would later spread across Russia was still gathering its strength. Nonetheless, in this moving artwork we can detect Malevich’s autobiographical musings on the subject of infinite suffering, perdition, and abandonment by God.

As in other works from Malevich’s Second Peasant Cycle, this painting reflects the tragedy of the period. Malevich felt that the world of the peasantry was disappearing, and with it, his own existence. On the back of the canvas, he wrote the following, rather bitter words: “This composition is comprised of the following elements: isolation, emptiness, and a life without escape”.