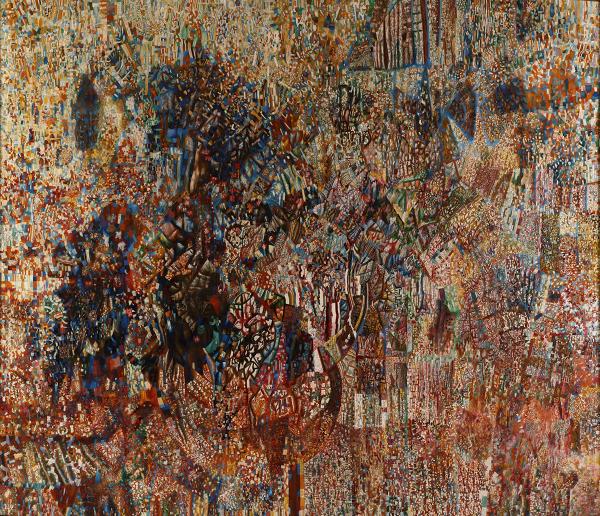 Formula of Spring and Acting Forces

Pavel Filonov was a renowned master of Russian avant-garde, one of the founders of nonobjective art. His Spring Formula shows a striving for generalized plasticity, depth of meaning, and versatility of symbols. A work of art should grow as any other living body in the nature. The very idea of spring is connected with growth, movement, awakening of nature. The composition of the painting is built from colourful atoms, as a living body that the artist sees from inside. P. Filonov developed an analytical art theory and gave his pupils the following advice: “Paint every atom with precision, meticulously inject colour into each atom you work on, let it sink in, as heat sinks into a body, let it be organically connected with the form, as the cells of a plant with a flower”. Speaking about the purpose of his work, the artist said: “The most important thing in every painting or drawing is a man’s mighty work on a thing that reveals his personality and immortal soul. I replace the complicated notion of “creativity” with the word “completeness”. It means that an artist should give all his will and effort to his work”. P. Filonov painted his colossal works with a thin brush starting from one side and gradually moving to the other one. Every stroke, every dot was for him a movement expressed in both form and colour.