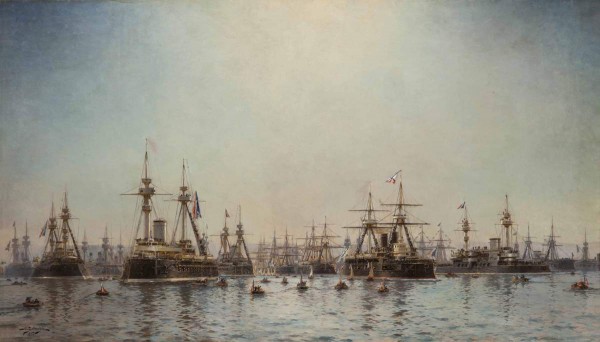 After their defeat in the Franco-Prussian War of 1870-1871, France put their hopes in Russia, which, concerned about the further strengthening of the resurgent German Empire, aimed to create a counterbalance. In July 1891, Kronstadt, the island/port near St Petersburg, was visited by a French squadron, whom Alexander III greeted personally, listening to the French national anthem, La Marseillaise, with his head uncovered. Two years later, in October 1893, the Russian squadron made a visit in return to the French port of Toulon, where it was met by an enthusiastic crowd of locals. Both of these events preceded the conclusion of the Franco-Russian Military Alliance, which was one of the most significant for all subsequent European history. Leonid Blinov’s painting captures, with great documentary precision, the celebratory moment of the Russian squadron’s arrival, which consisted of, notably, the battleship Nicholas I; the cruisers Admiral Nakhimov, Rynda, and In Memory of Azov; as well as the Terets gunboat.