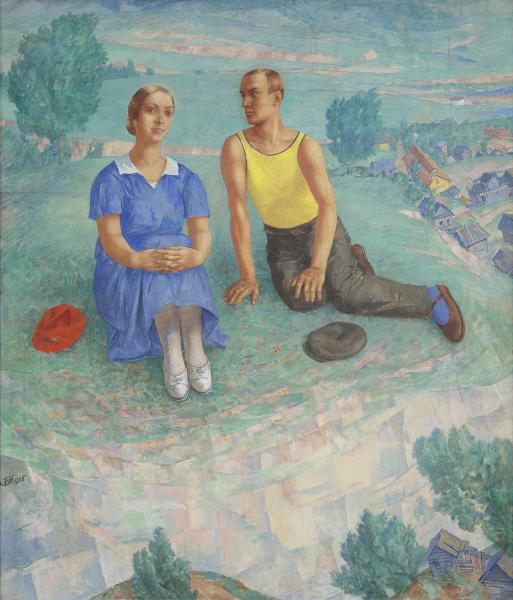 Kuzma Petrov-Vodkin was a remarkable painter and an innovator in painting. He took an interest in Early Renaissance and Russian icon painting, the result of which is considered to be the development of the “spherical perspective” (the artist himself avoided using the term “spherical perspective” and changed it for “live visibility”). In his autobiographical novels “Khlynovsk” and “Euclid’s Space” (late 1920s – early 1930s) he talks about the forming of the “spherical perspective” and gives its philosophic understanding. It is based on children’s impressions and personal experiences: “... here on a hill while I was falling down on the earth a completely new impression of the landscape flashed though my eyes ... I saw the Earth like a Planet ... a whole new feeling of a sphere embraced me on that hill.( Kuzma Petrov-Vodkin. “Khlynovsk”. “Euclid’s Space”. “Samarkandia”. Leningrad, 1982).

The principle of the spherical perspective is vividly represented in the composition of the painting “Spring”. Here the artist gives a compelling impression that the Earth is a Planet. In his mind, our perception of the space is invariably connected with the fact of our being on a spherical planet and it should be shown in a work of art. The abrupt twist of fore and backgrounds gives the “effect of presence” of a viewer inside, in the midst of the scene depicted. Arranging the composition with inclined axes causes the feeling of the rotation of the Earth – the artist is suggesting that all these elements represent the experience of being on the planet.