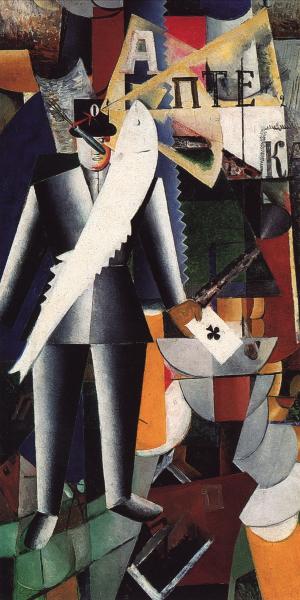 A game is not so much the object of representation as the main principle of the creation of Malevich's "alogism" pictures, one of which is Aviator. This absurd union of uncoordinated and mutually obstructing elements contains much of the game of shock, scandal, hooliganism with the viewer with which the young Futurists first began their careers in art. Malevich endowed serveral of this designs for the opera Victory Over the Sun with the symbols of the four suits, thereby presenting the entire action as an enormous game of cards. The costume of one of the Futurist strongmen, for example, features a club. The aviator was one of the characters in the opera and represented a sort of connecting force between the old world, smashed by the strongmen , the fragments of which fill the back ground of the painting, and the new world that was born in the succeeding void. The victory in this game lies with the Futurist strongmen (budetlyane), therefore the clubs card in the hand of the aviator can be rightfully considered an undeniable trump. Play and Passion in Russian Fine Art. St-Petersburg. 1999. P. 212.