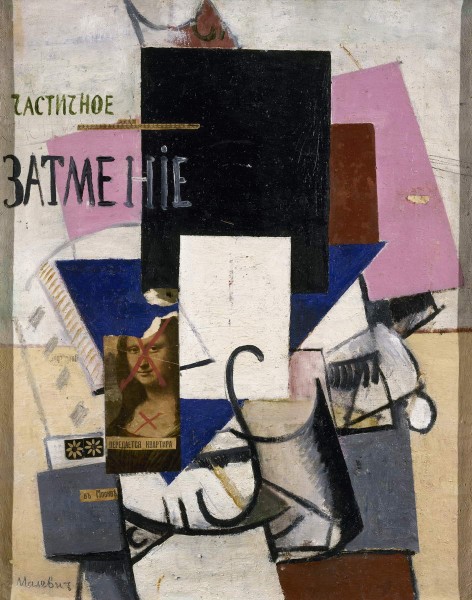 In this painting, Malevich reproduces Leonardo da Vinci’s celebrated portrait of the Mona Lisa, although the subject herself is partially obscured by geometric forms and volumes that seem to move around the pictorial space. It is almost as though the artist is underlining his abandonment of classicism and his embracing of the New Realist approach. According to Malevich, he originally placed a cigarette between the Mona Lisa’s lips, although this detail has been lost over time. Nonetheless, this symbolic act also served to underline his ironic reappraisal of the work of the great Italian master. Intriguingly, the black and white rectangles accompanying the image of the Mona Lisa are placed on the same level as her portrait, or even positioned slightly above it. The effect is immediately eye-catching, and in a compositional sense these geometric shapes are presented as works of art of the same caliber as da Vinci’s masterpiece, or even superior to it. This impression is heightened by the fact that the Mona Lisa has been crossed out with red lines.

The painting also includes an inscription, which translates to “Partial Eclipse”. Perhaps it is an attempt to justify the artist’s boldness and audacity, by suggesting the natural phenomenon of the eclipse has caused him to go a little mad. The newspapers of the day attest to the fact that in 1914, when Malevich was immersed in the creation of this artwork, there was indeed a solar eclipse. However, by incorporating this inscription, Malevich was not only immortalizing this natural phenomenon: it also represents a commitment on the artist’s part to his relationship with the observer.

After painting this Composition with the Mona Lisa, Malevich was ready to move beyond the limitations of so-called “practical realism”. “I have destroyed the ring of the horizon, and escaped the circle of objects. And now, everything has dissipated, like smoke”, he wrote.