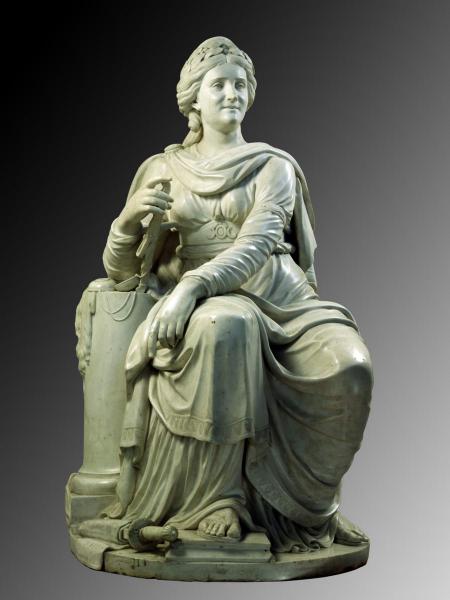 Catherine the Great as Themis

Catherine II (the Great; 1729–1796), née Princess Sophie Friederike Auguste von Anhalt-Zerbst-Dornburg, was born in the Prussian city of Stettin. In 1744, she arrived in Russia as the bride of Grand Duke Pyotr Fyodorovich, the future Emperor Peter III. That same year, she converted to Russian Orthodoxy and took the name Ekaterina Alexeevna. She married Pyotr Fyodorovich in August 1745. In 1754, she gave birth to an heir, the future Emperor Paul I. The relationship with her husband did not work out, and he planned to have her sent to a convent. In the summer of 1762, she led a conspiracy with his guards and overthrew Peter III, becoming Empress. In the first years of her reign, she adhered to a policy of "enlightened absolution", but after the peasant rebellion led by Emelyan Pugachev (1773–1775) and the French Revolution (1789), she was forced to toughen her regime. She led victorious campaigns against Turkey (1768‒1774; 1787–1792) and Sweden (1788–1790). During her reign, Crimea (1783), the Northern Baltic Sea, the Baltic states, the eastern part of Poland and the Aleutian Islands became part of Russia. Russian settlements were established in Alaska. Russia's prestige in Europe increased manifold. Catherine II is depicted with the Order of St Andrew (ribbon, star and cross).

The personified allegoric representation of an ideal ruler varies in the sculptures of Catherine the Great.  This ideal ruler was created by the public opinion and, in large part, by the Empress herself. The evolution of this image, along with other events, showed the emergence and the development of classicism in the Russian arts at the end of the 18th century.

Mikhail Kozlovsky sculpted this marble statue during the year following the death of the Empress. He represented her with a pair of scales and a sword, which are the allegoric attributes of Themis. In the Greek mythology, Themis is the goddess of justice, keeper of the law.