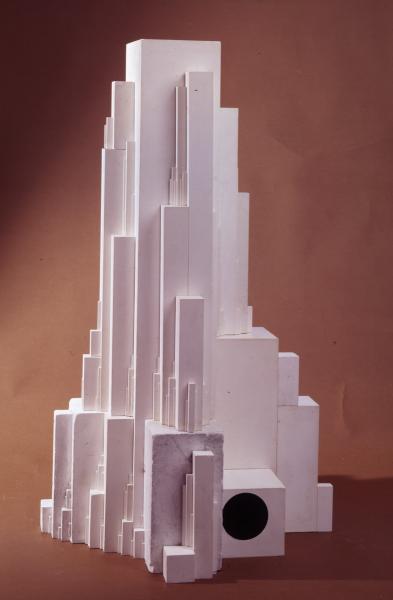 In 1917, after Malevich had defined and developed the concept of Suprematism as a variant of geometric abstractionism, the October Revolution broke out, and marked the beginning of a period that would drastically alter the destiny of Russia and its people. The revolution was followed by the Civil War, and the consequent political and social upheaval had a dramatic effect on the largely peaceful development of Russian culture.

Like many other artists, Malevich enthusiastically embraced the new regime. He played an active role in organizing the new artistic processes and approaches, which, according to Malevich and his fellow members of the avant-garde, had to be rebuilt on new principles. In 1919, at the invitation of Marc Chagall and a number of his students and followers, Malevich traveled to Vitebsk, in present-day Belarus, where a new artistic association named UNOVIS, or “Champions of the New Art”, had been created. UNOVIS was given the task of decorating the city in order to celebrate the first anniversary of the Revolution.

It was in Vitebsk, and later at the State Institute of Art in Leningrad, where Suprematism first began to explore the world of architecture, in the form of complex and voluminous spatial compositions. The concept of the “cosmos” was maintained, and Malevich would speak to his students about the cosmos and the so-called “cosmic cities”. By the start of the 1920s, the Suprematist forms that had previously occupied a white pictorial space and somewhat resembled planets had now become more realistic architectural profiles. In addition to conceptualizing cities in outer space, the designs produced by UNOVIS also included “aero-cities” that would glide above the Earth.

The new word “architecton” and the first three-dimensional compositions first appeared around 1923. Vertical models similar to this one were built around the spatial dynamics of the most elemental geometric shapes. At the time, architectural forms such as this one looked as though they had been designed to overcome Earth’s gravitational field and reach out into space.