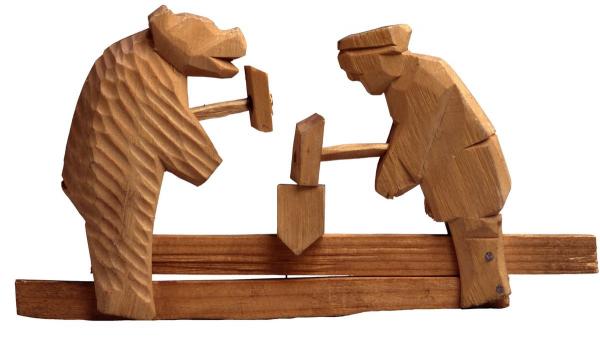 The Bogorodskoe village is located near to Sergiev Posad. A local legend says that more than three centuries ago, the mother made a doll "Auku" (a doll in the form of a swaddled baby) for her children from a wooden log, having founded a new craft. The territorial proximity of Sergiev Posad to Bogorodskoe led to partnership and resulted in mutual influence over the art of both oldest centres. The citizens of Bogorodskoe created an unpainted toy, which was sometimes taken to be painted by Sergiev Posad painters. However, with all the mutual influences, the Sergiev Posad sculpture toys and the simple "balbeshky" of the Bogorodsky masters had their differences. In Bogorodskoe the main characters were sedate and power-like peasants and peasant women, portrayed at dinner or engaged with their household. Many figures are fastened to planks, slats, rods, springs, ropes, with the help of suspenders and other witty devices convey the signs of real life in a playful manner. Assistants of the peasants are a horse and a bear, two favourite characters of Bogorodsky carvers. A kind of Bogorodsky art symbol became "blacksmiths" - a bear and a peasant on two slats, alternately hammering on the anvil.

This toy is as popular as a matryoshka doll. The famous French sculptor Auguste Rodin kept the matryoshka and appreciated the significance of it. In 1910 a group of Russian artists visited Rodin's studio. He showed them the "blacksmiths" and asked: "Do you really have a lot of people who are able to create such a beautiful thing?"