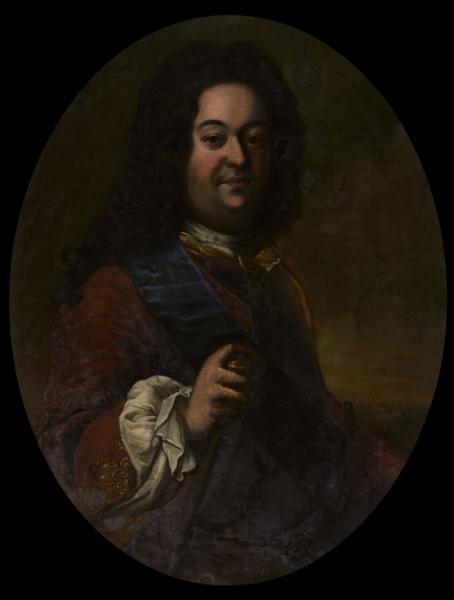 Nilolai Fedorovich Golovin (1695 – July 15, 1745). Count, son of Fyodor Golovin; from 1706 he studied at the Naval School. In 1708 Peter the Great sent him to England and Holland to study maritime affairs. Upon his return to Russia in 1715, he was assigned to the Navy in position of Lieutenant. In 1720 he was promoted to Captain Lieutenant; in 1721 upon the conclusion of the Treaty of Nystad he was made Captain 3rd rank. In 1724 he was appointed attendee of the Admiralty Division. During the reign of Empress Catherine I in 1725, he was appointed special envoy to the Swedish court. In 1726 Golovin was promoted to Captain 2nd rank and Adjutant General of the fleet (Captain 1st rank). In 1730 he became Schout-bij-nacht (Rear Admiral), and in 1733 he was appointed Admiral and President of the Admiralty Board. In 1738 he took command of the galley harbor and fleet. After the restoration of the Senate in 1741, he was appointed senator, as he was still president of the Admiralty Board. During the Russo-Swedish War in 1742 he was Governor-General of St Petersburg. As Commander-in-Chief of the troops, he was assigned to protect the capital in the event of Swedish attack. He was married to Sophia Nikitishna (?) with whom he had a daughter named Natalia; Natalia later married Field Marshal General Peter August, Duke of Schleswig-Holstein-Sonderburg-Beck).

It is hard to identify the uniform because rules and regulations concerning navy uniforms constantly changed until 1745. It is possible that Golovin is depicted in civilian dress. The portrait is dated based on him having a ribbon of the Order of St. Andrew the Apostle the First-Called that he received on November 10, 1740, and a decree of Empress Elizabeth Petrovna dated June 18, 1744, according to which Count Nikolai Golovin was placed “on leave so that he can treat his disease.”