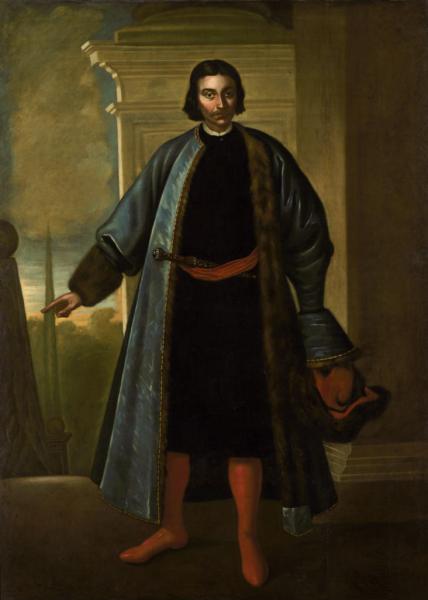 School of the Armoury Chamber. After 27 January 1699

Andrei the Younger Repnin (? – January 27, 1699)Youngest son of Ivan Repnin (1615– 1697). His father Ivan was a house steward of Tsar Alexis Mikhailovich, and a boyar close to the tsar; his mother was Yevdokia Nikiforovna Pleshcheyeva (? – April 8, 1695). Andrei, together with his brother Anikita, accompanied Peter the Great during his dramatic overnight ride to the Trinity Lavra of St. Sergius on the night of August 7-8, 1689. In approximately 1689 Andrei married Tatiana Alexeyevna, daughter of Alexei Rzhevsky; who was an okolnichy (a senior court rank) and the military commander of Samara during the years 1689–1690. Andrei was among some 39 stolniks (cupbearers) and the same number of soldiers in February 1697 who were sent to Italy to study maritime affairs.

From the second half of the 19th century to the early 21st century scholars believed the person depicted here to be Alexander Borisovich Repnin; however, this traditional view was recently reconsidered. In 2014 a new version was accepted by the Attribution Council of the Russian Museum. Based on the clothing depicted the portrait was dated from the 1680s to 1690s. It appears that it was Anikita Ivanovich that outlived both of his brothers who ordered the painting.