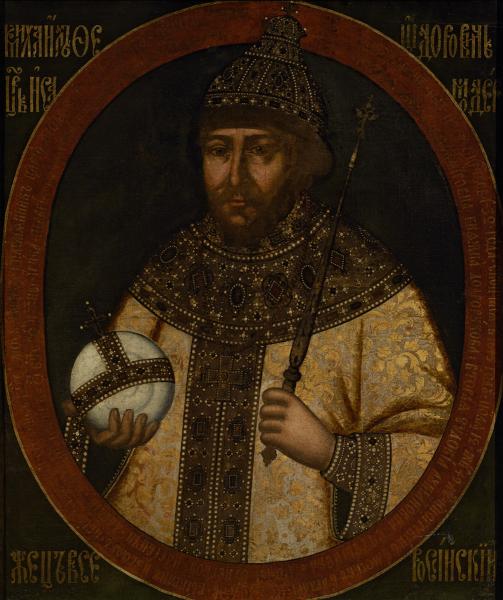 Michael I Feodorovich (June 22, 1596 – July 23, 1645). First tsar of the Romanov dynasty, grandfather of Peter the Great. Son of Boyar Feodor Nikitich Romanov-Yuriev who was a nephew of Anastasia Romanovna Zakharyina, the first wife of Ivan the Terrible, and a cousin of Tsar Theordore I Ioannovich, and Xenia Shestova. Michael was elected Tsar by the Zemsky Sobor (Assembly of the Land) on February 21 (March 3), 1613; his reign started on March 27, 1613; he was crowned on July 11, 1613. During the reign of Michael I Feodorovich both domestic and foreign policies were aimed at relieving the consequences of the Time of Troubles. On September 18, 1624 he married Princess Maria Dolgorukova who died shortly after their wedding. On February 5, 1926 he entered into a second marriage with Eudoxia Streshneva (1608–1645). Michael I had ten children.

This painting is a companion piece to the portrait of Tsar Alexis Mikhailovich. The first portrait of Michael Feodorovich was used for the first Schleswig edition of “voyages and travels” of the famous German traveler and scientist Adam Olearius published in 1647. This original work from the Orlearius’ book was also used for creating an engraved portrait of Michael Feodorovich for the “Titulyarnik” of 1672 (a reference book containing titles of Russian and foreign rulers). The latter was probably a reference sample for the portrait from the collection of the State Russian Museum. It seems likely that the portrait was painted in the end of the reign of Tsar Theodore III Alexeyevich, or during the reign of Tsarevna Sophia (1682–1689).