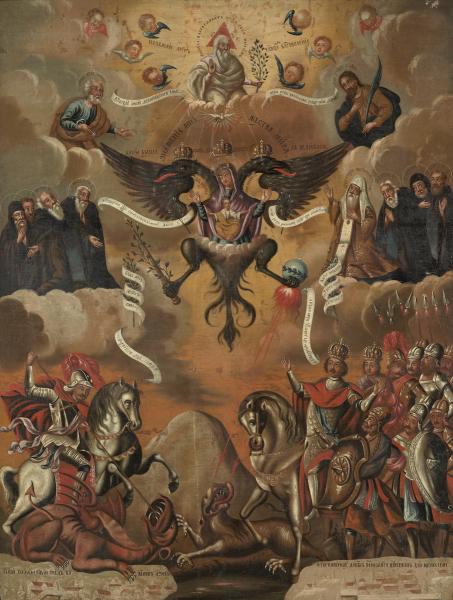 This painting copies the composition of Leonty Tarasevich’s engraving that was placed on the frontispiece of the Kiev-Pechora Patericon, but with some alterations. In the center, there is a double-headed eagle with the Holy Mother and the Christ Child (Our Lady of the Sign icon type). Above them, you can see God the Father surrounded by cherubim. Below them a dove represents the Holy Spirit. To the right and to the left, the artist depicted the patron saints of the imperial family (Saint Peter and Saint Alexius, Man of God). Below on the clouds you can see the Kiev-Pechora saints (Theodosius of Kiev, also called Theodosius of the Caves, and Anthony of Kiev, also called Anthony of the Caves) on the left and on the right there are the Moscow saints (Alexius, Metropolitan of Moscow, Sergius, Nikon and Kirill of Radonezh). An equestrian portrait of Peter the Great is placed in the bottom row of persons depicted together with portraits of Alexei and Boris Sheremetev. Saint George, who has the face of Sheremetev (with no nimbus), is defeating the dragon, which symbolizes the Ottoman Empire; and heaven’s wrath, represented by lighting, is defeating the lion, which is a symbol of Sweden.