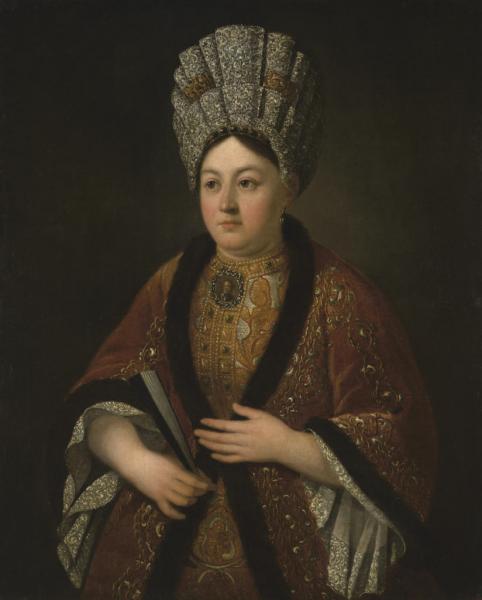 Maria Stroganova (July 20, 1677 – November, 1733). Baroness, daughter of Yakov Zakharyevich Novosiltsev (? – November 16, 1676). Sister of Vasily Novosilstev, the military governor of Solikamsk. Second wife of Grigory Stroganov, a prominent person and salt manufacturer; lady-in-waiting of Catherine I and Anna Ioannovna; mother of Alexander (1698–1754), Nikolai (1700–1758) and Sergei (1707–1756) Stroganov. It was due to her successful petitioning of Peter the Great that the Stroganov family was given the title of Barons of the Russian Empire (May 30, 1722). A book by Peter Buslaev published by the Russian Academy of Arts under the title Spiritual Contemplation (1734) is dedicated to Maria Yakovlevna Stroganova.

A companion portrait to the portrait of the “nobleman” by Grigory Stroganov (Odessa Art Museum). The person depicted is Maria Stroganova, née Novosiltseva. Traditionally, the portrait is dated “between 1721 and 1724.” However, Stroganova was made lady-in-waiting and received the respective badge of honour – a pin with the portrait of Peter the Great – upon the coronation of Catherine I, which took place in Moscow on May 7, 1724. Out of particular respect, Peter the Great made an exception for Stroganova and allowed her to wear an ancient Russian dress at court.