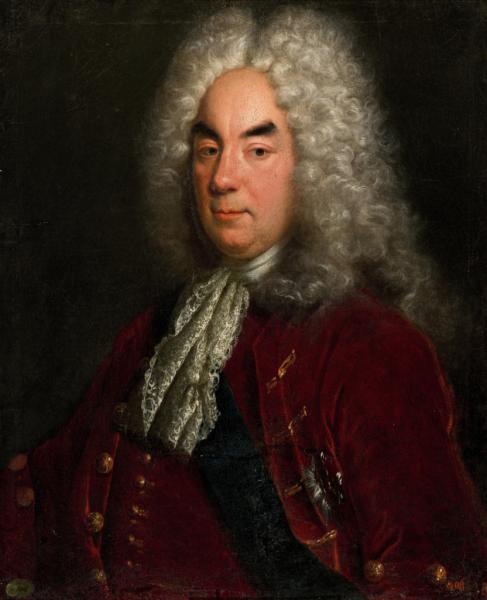 Pyotr Andreyevich Tolstoy (1645 – February 17, 1729). Count (1724), statesman and diplomat. Son of Okolnichy Andrei Tolstoy and Solomonida Miloslavskaya (a distant relative of Tsaritsa Maria Ilyinichna Miloslavskaya). Took part in the Streltsy Uprising (1682), but after the uprising was successfully squashed, he switched sides and defected to Peter the Great. During the years 1701–1714 he was ambassador in Constantinople. He was appointed senator (1714) and president of the College of Commerce. In 1717 he convinced Tsarevich Alexis; who was hiding in Naples, to return to Russia, which made him one of the closest confidants of Peter the Great. In 1718 he was awarded the Order of St. Andrew the Apostle the First-Called. Tolstoy was in charge of the Secret Chancellery. In 1727 he was sentenced to death for conspiracy, but instead was sent to live in the Solovetsky Monastery.

The painting was dated based on the Order of St. Andrew the Apostle the First-Called that Tolstoy received in February 1718, for his contribution to the return of Tsarevich Alexis Petrovich to Russia. The portrait was first attributed to Georg Gsell in a guidebook published by the Russian Museum. Several scholars rightfully compared the painting with a mirror portrait from the Moscow Tolstoy Museum, signed and dated by Johann Gottfried Tannauer (1719). Research conducted confirmed the existence of technical similarities between the portrait from the Russian Museum and the work from the Tolstoy Museum in Moscow.