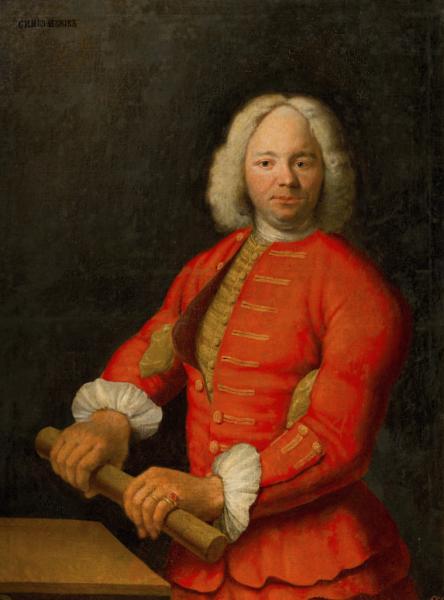 Portrait of the Giant Nicolas Bourgeois

Nicholas Bourgeois (168?–1724). Frenchman, giant and strongman (his height was 2 m 27 cm). Peter the Great hired him during his trip abroad in the town of Calais and brought him to St Petersburg where Bourgeois would serve as a footman of the tsar. Peter made him couple with tall Finnish women to see if their children would be as tall as they were. After his death the giant’s skeleton and internal organs were sent over to the Kunstkamera where they are still exhibited. It was also in 1724 that Carlo Bartolomeo Rastrelli was ordered to construct a mobile wooden leather-covered model of the giant’s body. The item was kept in the Kunstkamera until the end of the 18th century.

Traditionally, the portrait is considered to be created by Georg Gsell. The hypothesis first appears in the catalogue of a portrait exhibition of 1870. In 1724, after Bourgeois’ death, Carlo Bartolomeo Rastrelli created a mobile, wooden, leather-covered model of Bourgeois’ gigantic figure. It is possible that the portrait was painted from this model, not from life. Thematically the “strong man” fits well in the Preobrazhensky Series; these were paintings of members of the Drunken Synod whose portraits were created during the reign of Catherine I.