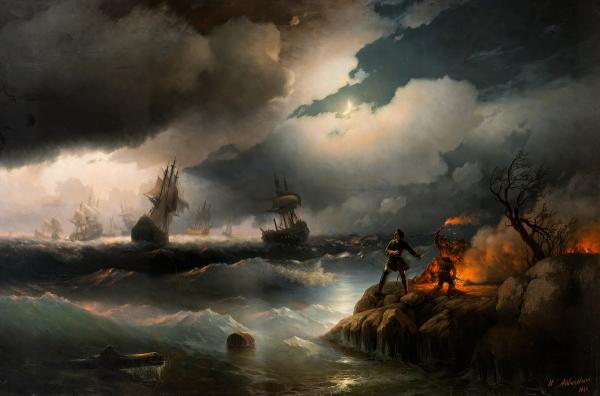 The painting Peter I at Krasnaya Gorka Lighting a Fire on the Shore to Signal to his Sinking Ships tells about the event occurred during the war campaign of 1710. The Russian forces besieged the Vyborg.
By the Peter’s I intension the Russian Fleet had to carry new troops to supplement the Russian Army at Vyborg, to supply the army with the guns, weapons and food and take part in the siege of Vyborg  from the sea. It was for the first time as the whole Russian Fleet came out into the sea.
The Russian Fleet left St. Petersburg on 25 th April 1710. On his way to Vyborg the ships were caught by the storm and they were taken into the open sea. Peter I with a group of sailors on the yacht “Lizzetta” reached the shore and made a big fire, which served for the ships as a lighthouse and pointed the way to the safe bay. The fleet spent there the night of 1 May 1710 and then moved to Vyborg.
The place Krasnaya Gorka is situated at the Gulf of Finnland, not far from the suburb of St. Petersburg, Lomonosov, and  Kotlin island. It is the southern shore of the Gulf of Finland. Later in the beginning of the 20 th century there was built the fort. 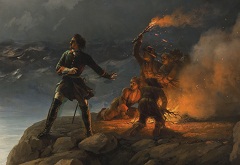