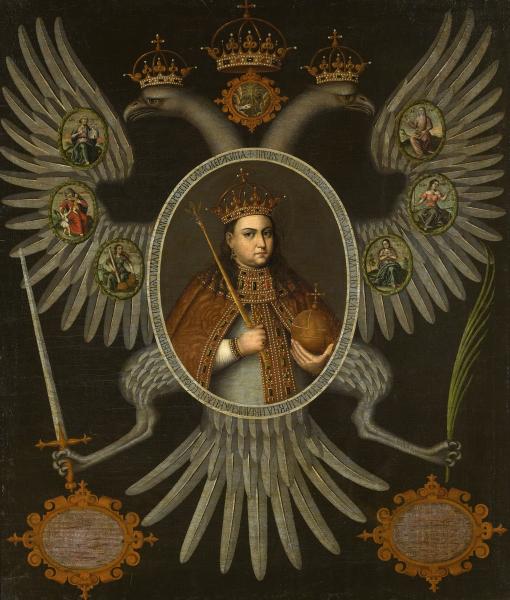 Sophia Alexeyevna (September 17, 1657 – July 3, 1704). Tsarevna, fourth daughter of Tsar Alexis I Mikhailovich with Maria Ilyinichna Miloslavskaya. She came to power through the Moscow Uprising (1682). During the period from May 1682 to September 1689 she ruled over Russia as regent for her younger brothers, Peter and Ivan. In September 1689 her attempt to become Tsaritsa failed and she was confined to the Novodevichy Convent. In 1698 she was made to take the veil under the name of Susanna, and later, shortly before her death, she was tonsured into the Great Schema and given the name Sophia.

Three portraits of Sophia Alexeevna of this kind are known. Soon after Sophia’s conspiracy was uncovered, most of her pictures were destroyed. The portrait of Sophia Alexeevna from the Romanov gallery is based on a portrait from the 1672 “Titulyarnik” (a manuscript containing titles, coats of arms, and portraits of Russian and foreign rulers) that was decorated with multiple rulers’ portraits. A new detail here is the image of a double-headed eagle with six medallions with allegorical figures of “Devoutness,” “Maidenhood,” “Grace,” “Justice,” “Strength,” and “Lenitude” on its wings. Sophia is depicted wearing a crown and holding a sceptre and the orb, even though she wasn’t crowned as tsaritsa.