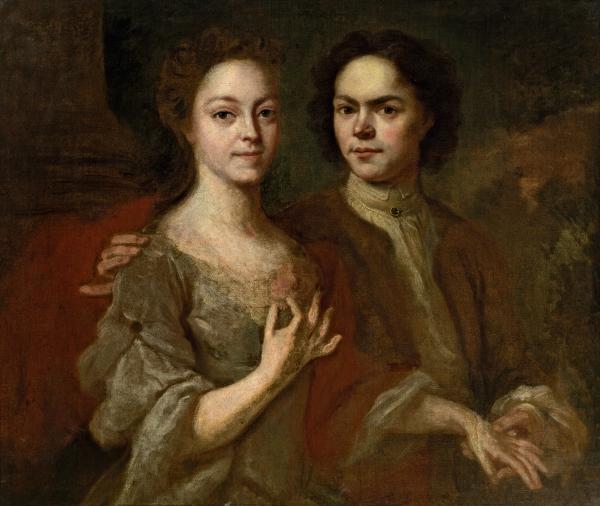 Andrei Matveyev (1702, (?) – 1739, St Petersburg). Painter, portrait artist, and icon painter, who created allegorical, and decorative and monumental compositions. In 1716, at the request of Peter the Great, he was then sent to study painting in Holland. From September 1717 to September 1723, he studied under Arnold Boonen in Amsterdam, and from December 1723 to May (?) 1727 – in the Antwerp Academy of Fine Arts under (?) Sperwer. In August 1727, he came back to Petersburg and began his work in the Chancellery of Construction. In 1731, Matveyev attained the rank of Master and became the head of the Painting Brigade of the Chancellery of Construction. He participated in creating murals for the Peter and Paul Cathedral, as well as tsarist residences in Petersburg, he also painted icons for the Church of The Holy Righteous Simeon and Anna The Prophetess.

Irina Matveyeva (1712/14–1740s). Daughter of the blacksmith Stepan Antropov. In 1729 (or 1728) she married the artist Andrey Matveyev. She later entered into a second marriage with the merchant Turgenev.

The portrait is thought to have been painted in 1729, the year the artist got married. Some researchers believed that the woman depicted is much older than the artist’s wife (who was only 16 years old when the portrait was painted), and that the people depicted are Princess Anna Leopoldovna and her husband Duke Anthony Ulrich of Brunswick. Modern technical analysis established that the woman’s face was “aged” by alterations introduced after the work was completed.