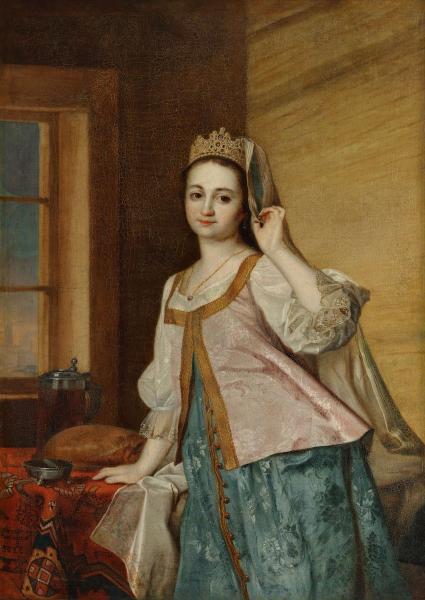 In the D. G. Levitsky’s works of the 1770s and 1780s a special place was occupied by “role portraits”. The series of portraits created by him in the 1770s of pupils at Smolny Finishing School depicted them playing roles in operas and dramas, or just dancing, studying or playing musical instruments This image of Agasha Levitskaya could also be called a costume portrait: she’s shown dressed in traditional wedding attire of the Russian North. This was indeed appropriate, for soon, in 1785, Agasha Levitskaya would get married.

Agafya Dmitrievna Levitskaya (1760s – no earlier than 1805) was the artist's daughter by his spouse Nastasia Yakovlevna Levitskaya (1746 no earlier than 1824). In 1785 she married “Collegiate Assessor A. M. Andreyev, assistant director of the Senate printing house” (who received his rank in 1788). After the death of her husband in 1805, she and her children were cared for by her father. A copy (?) of the portrait is in the Russian Museum.