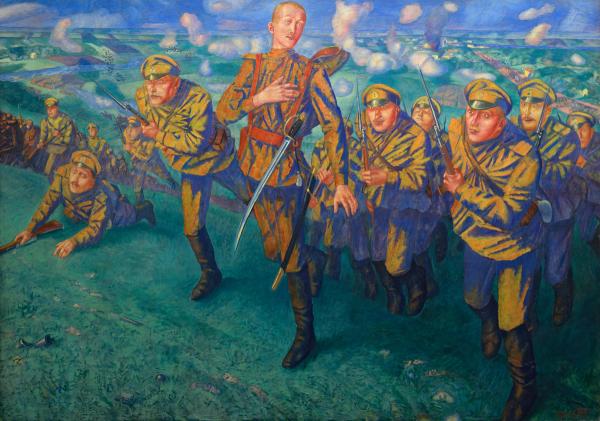 On the Firing Line

The painting of Petrov-Vodkin was created in the very middle of the war and was devoted to the theme of sacrificial service to the high idea of love of the Homeland. It was exhibited during the February Revolution of 1917 at the “World of Art” exhibition. The painting received a stream of comments in the press. It was highly appreciated by the writer Leonid Andreev.

An officer – a young boy has become rigid, his hand laying on his heart which has been hit by the bullet. In this tragic moment he has stopped being together with those who go on the bayonet attack behind him. The soldiers are rhythmically connected by the line of battle, their faces are united in the expression of doomed heroism. On the contrary, the face of the officer is calm and serene. He has already come face to face with God's world, his soul seems to be rising over the Homeland, the plain going away to the horizon line of forests and villages. He is both a hero and a sacrifice and he is a winner over the death. The theme of a righteous death is represented in the painting as a relief, as promise of salvation. The favourite saying of Petrov-Vodkin in the letters of those times was “Let God save Russia”.

The use of the spherical perspective allows the depiction of everything simultaneously from above and sideways to render the experience that the Earth is a planet.