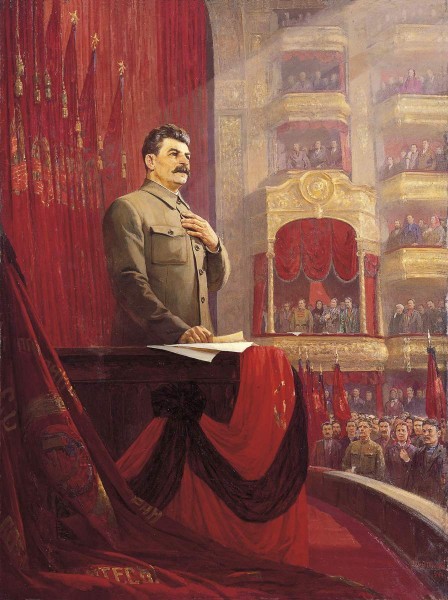 Reshetnikov’s painting was among those first shown at the exhibition Joseph Vissarionovich Stalin in the Fine Arts. The treatment of this theme — the continuity of Stalin’s ideas with those of Lenin — was very typical for Soviet mythology, in which historical myths often acquired the significance of real events. In this case the depicted event actually took place. The Second USSR Congress of Soviets, known as the one at which the Soviet constitution was ratified, was held in the Bolshoi Theatre from 26 to 31 January 1924. At the congress Stalin delivered a speech devoted to Lenin’s death, known to historians as the “Great Oath”. The establishment of Stalin’s personality cult began with this speech, so it’s not surprising that the event found such a monumental embodiment on canvas in 1949. Proclaiming himself Lenin’s successor despite Lenin’s 1922 testament, which was sacrilege in and of itself, Stalin needed to establish his right to that title at all costs. And just as that right was established in life in the 1920s and 30s, so it was in art in the 1940s. The triumphant colouration, the golden rays of light “raining down from the heavens” and the contrast of the leader’s towering figure with the crowd in the background help convey the idea of the uniqueness and monumental greatness of a man who in reality could boast of neither height, athletic build nor physical beauty.