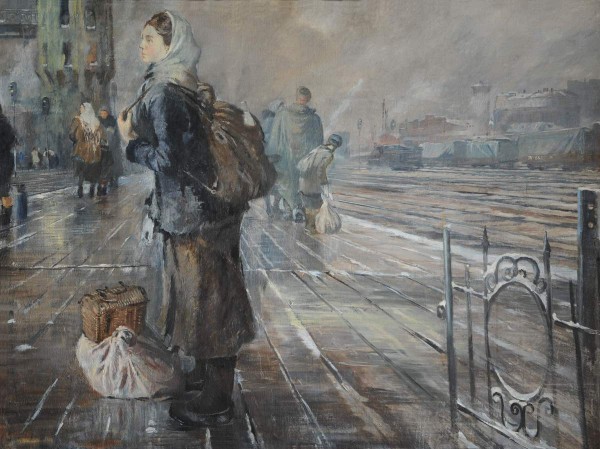 The tribulations of war from 1941 to 1945 strongly influenced Pimenov’s oeuvre, with the lyrical artist trading his cheerful palette of the 1930s for the harsh hues of wartime reality. The series of dramatic female images he created at that time comprise a lyrical and passionate ode to the Russian woman. The painting Autumn Station most fully reflects the artist’s complex emotional experience on the threshold of war and peace. Intensified by subtle feeling and psychological nuance, this ordinary life scene expresses the poignancy of returning home to peacetime life from evacuation as well as a quiet optimism and faith in the country’s rebirth. The nearly monochromatic palette along with such authentic details as the gray traveler’s bags, the bottle of milk in the knapsack, the wet train platform and the grating powdered with snow all serve to heighten the sublimity and monumentality of the female image, which seems to personify the victorious people’s lifeaffirming strength and hope for a happy future.