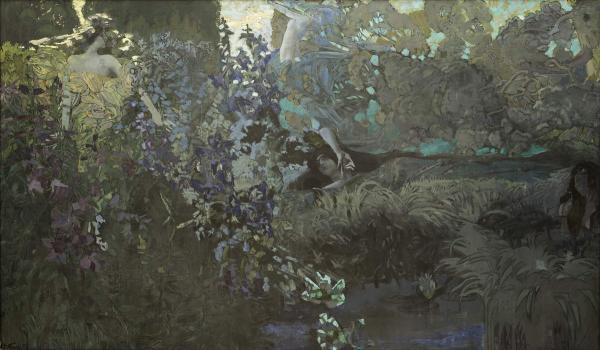 Vrubel dreamed about combining art and life in his creative work and searched for a high monumental style and a special national form that was expressed in ornamental and rhythmic patterns characteristic for his works. His style was close to the stylistics of art nouveau that is known for its rapid transitions from statics to movement and from serenity to sudden agitation. The artistic features of art nouveau include flowing lines, oblong figures, expressive contours, and the use of floral motifs. Stems, leaves, and flowers of faded exotic plants intertwine and create a complicated pattern in which one can see female figures or fantastic beasts.

Art nouveau artist were keen on allegories, and this tendency is vivid in the Spring panel. The awakening nature is symbolized by four mermaids. A naked female figure emerges from the mystical entwinement of giant trees, dense grass and fantastic flowers. The woman looks at the light of dawn – the “Beam”, as the artist calls it. It is embodied by another woman’s figure with a strangely bent body. The woman longs from the grass to the sky. The third “Fairy” comes out of the grass and marsh wilds. She represents the awakening – her face is motionless, her big dark eyes have just opened and her first morning thoughts float in them as the remains of her night dreams. The forth figure in the right is depicted only fragmentarily – we see a woman’s face with the expression of fear and despair. When asked about the meaning of this figure, Vrubel answered: “It’s a fairy tale”. Four female figures amplify the general emotional tone of the landscape, its poetry and music. The images created by the artist have multiple meanings and may arise various emotions. The use of various shades of green gives the feeling of early morning freshness when the sun is about to rise above the horizon. This panel is a part of a decorative and monumental triptych called Times of Day that was created by Vrubel for the interior of S.T. Morozov’s house in Moscow (designed by the Moscow art nouveau architect F.O. Schechtel).